The U.S. originally entered the tournament seeded thirteenth and in Pool C alongside France, Malaysia and South Korea, but a late withdrawal from Switzerland’s world No. 30 Nicolas Müller caused a seeding and pool assignment shift on Saturday, December 14. As a result, Switzerland’s seeding dropped to fifteen and the U.S. moved up to twelve and into Pool A with Switzerland and Egypt.

The U.S. and Egypt–the first-time men’s world teams host nation and defending champions–appropriately opened proceedings with the tournament’s first match on the glass court in front of a full gallery of squash fans. Despite the daunting match up, Team USA acquitted themselves well against the title favorites.

The No. 2’s led off with Team USA’s Chris Hanson against recently-crowned PSA world champion Tarek Momen, who put Egypt on the board 11-2, 11-9, 11-8 in twenty-seven minutes. The No. 1’s followed on as world No. 1 Ali Farag awaited three-time U.S. champion Todd Harrity in a match up of former college champions. It was the Harvard graduate, Farag, who came out on top, but Princeton’s Harrity pushed the world champion 11-6, 11-7, 10-12, 11-4 in thirty-seven minutes.

“He’s playing off his rocker!”

Two winners of the highest qualify from @toddharrity as hosts @TeamUSASquash take on @MasrSquash in their World Teams opener! 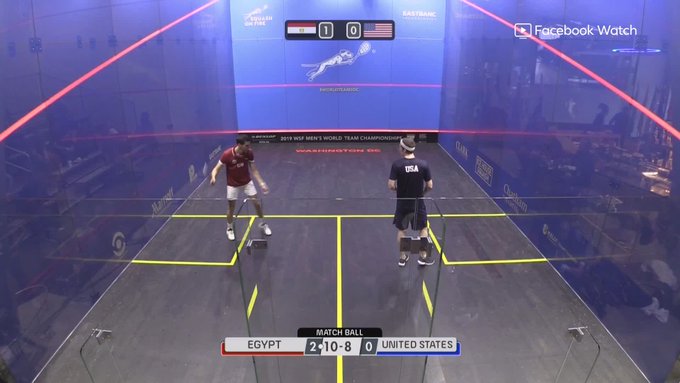 Penn junior Andrew Douglas stepped up in No. 3 position against former world champion and world No. 3 Karim Abdel Gawad–the highest-ranked player Douglas has ever faced on the PSA World Tour or international competition. The twenty-one-year-old from Brooklyn impressed against Gawad, narrowly losing in four games and forty-one minutes 8-11, 11-9, 11-8, 11-6.

“I’m really pleased with our start,” Farag said. “We had a strong team in front of us in the USA, Todd Harrity has been playing well so it was good to get that win myself and also for Tarek to give us that head start. It’s good to get the first win under our belt. Having the likes of Karim, Abou and Tarek next to me gives me a lot of confidence and a lot of things to look up to. We lift each other up and hopefully we can bring home the title.”

U.S. focus now shifts to Tuesday afternoon with an important match against fifteen seeds Switzerland at 3pm local time. With only three teams in Pool A, the winner of the match will guarantee a spot in the 1-12 playoff that begin on Wednesday.